A Christmas Story House and Museum

Are you a fan of the holiday movie A Christmas Story

Did you know that it was filmed in Cleveland, Ohio?

The Christmas Story House and Museum (Tremont) that A Christmas Story was filmed in resides in the city of Cleveland, Ohio in the Tremont neighborhood.  The house is open for tours year-round, and there is also A Christmas Story House Museum and gift shop adjacent to the house, which features original props, costumes, and memorabilia from the film, as well as hundreds of rare behind-the-scenes photos. Among the props and costumes are the toys from the Higbee’s window, Randy’s snowsuit, and zeppelin, the chalkboard from Miss Shields’ classroom, and the family car.

A Christmas Story was filmed and released in 1983 and has become a cult classic with a large following of fans and collectors of the movie memorabilia.  If you are not familiar with A Christmas Story, the movie takes place in 1940′s Indiana, where nine-year-old Ralphie longs for the ideal Christmas gift, a 200-Shot, Range-Model Air Rifle with a compass in the stock and this thing that tells time.” But when gruff dad and doting mom, and even a stressed-out Santa quote the usual BB gun warning, “You’ll shoot your eye out!” Ralphie mounts a full-scale, hint dropping campaign that is a sly combination of innocence and calculation. The movie is not only about Christmas and BB guns, but also about childhood and semi-dysfunctional family life. 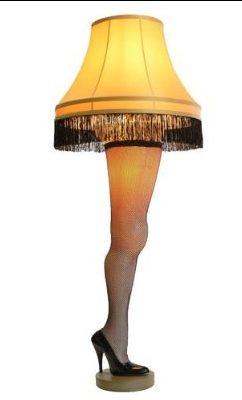 One of the most famous pieces of movie memorabilia from A Christmas Story, is the Leg Lamp.  The movie actually had two leg lamp props that were used while the filming went on and both were broken.  However, replicas of the famous Leg Lamp

can be purchased in several sizes to decorate your home or office. Read more about the famous Leg Lamp here.

For more information about touring A Christmas Story House and Museum call (216) 298-4919.

The original house from the 1983 holiday film, A Christmas Story, has been restored and is now open for fans to relive Ralphie’s favorite Christmas.

For fans of the 1983 film, A Christmas Story, a pilgrimage to the house where Ralphie and his family celebrated their legendary Christmas with BB guns, bunny suits, and Chinese cuisine, is a must. The house, located in the Tremont neighborhood of Cleveland, Ohio, has now been restored to its former movie glory and is open to the public for tours.

Based on the writings of humorist Jean Shepherd, A Christmas Story is the simple tale of 12-year-old Ralphie who wants a BB gun for Christmas. Bob Clark, who was then best known for his B horror films and the teenage smut classic Porkys, directed the movie. Set in 1930s Indiana, the film is a nostalgic and hilarious take on the torments of a childhood spent surrounded by bullies, embarrassing parents, and well-meaning adults who only have Ralphie’s best interests at heart when they warn him that he will shoot his eye out with his longed-for BB gun. A Christmas Story opened in 1983 to mixed reviews and was by all accounts a flop at the box office.

The film subsequently found new life when it was resurrected on cable television in the 1990s. Many fans of the film became acquainted with and then obsessed by, A Christmas Story during TNT’s 24-hour marathons on Christmas day. A holiday classic was born.

Although set in Indiana, A Christmas Story was filmed in Cleveland and Toronto. Higbee’s department store in downtown Cleveland, where Ralphie has his distressing encounter with Santa Claus, was the only department store that gave its consent for the filming. It was while they were filming in Cleveland that Bob Clark located the perfect house for Ralphie in the working-class neighborhood of Tremont.

A Christmas Story House and Museum

In 2004, the original house featured in A Christmas Story was put up for auction on Ebay with a starting bid of $99,900. Over the years, the house had been modernized, converted into a duplex and was used as a rental property. Brian Jones, a major fan of A Christmas Story and purveyor of replica leg lamps from the film, spotted the ad and immediately offered $150,000 for the house. $240,000 later, it was finally restored to its movie glory, complete with the leg lamp in the window.

Visitors to the house are first given background about the making of A Christmas Story, including the interesting trivia that Jack Nicholson, the ax-wielding dad from The Shining, was originally considered for the part of the Old Man. Visitors are allowed to explore the house to their heart’s content. Taking pictures is encouraged, as are stroking the leg lamp, trying on the bunny costume and posing with the Red Ryder BB gun. A turkey roasts in the authentic 1930s kitchen, vintage copies of the Chicago Tribune litter the living room and Lifebuoy Soap sits in the bathroom, ready to wash out the mouths of potty-mouthed youngsters. A Christmas tree is of course on display and sharp-eyed fans of the movie will notice touches such as Ralphie’s Orphan Annie Decoder Ring and an instruction manual for the Old Man’s nemesis, the malfunctioning furnace.

Across the street, at the Christmas Story Museum, original props and stills from the film are on display. Here, fans can take in the sights of little brother Randy’s snowsuit and toy zeppelin along with other costumes and toys in the film. At the nearby gift shop, leg lamps of all varieties and sizes are for sale, along with a wide selection of A Christmas Story themed gifts.

In the summer, A Christmas Story House will have a special guest, when actor Ian Petrella, who played Randy in the film, arrives back home to meet visitors and give tours of his “childhood home”. A grown-up now, Randy has moved from the bedroom he shared with Ralphie and into private quarters in the house. He is on hand to answer questions about the making of the film, sign autographs and pose for photographs. He fondly recalls his days of being unable to put his arms down while wearing his red snowsuit and being encouraged to “eat like a piggy”. Randy is also available to go out for a Chinese dinner with fans (although the scenes of the Chinese restaurant in the movie were actually filmed in Toronto).